Newsnation, a national news and entertainment cable network reaching 75 million television households across the United States, recently covered the solving of the 1966 murder of Danny Goldman: More than 50 years later, Paul Novack believes he knows what happened to his childhood friend, Danny Goldman. Goldman’s boyhood friends have waited 55 years for closure. Goldman was kidnapped in front of his family in their Florida home when he was 17, and later murdered. Inspired by a letter written by Goldman’s mother that asked her son never be forgotten, and angered by the mysterious circumstances surrounding their friend’s death, his childhood friends set out to solve his murder. Novack, one of Goldman’s childhood friends who helped solve the case, said on “NewsNation Prime” that Danny’s kidnapping and murder was “off the charts” as far as cold case lists and missing persons reports go. “There was nothing happening and that couldn’t stand,” Novack said. “We decided a
Post a Comment
Read more 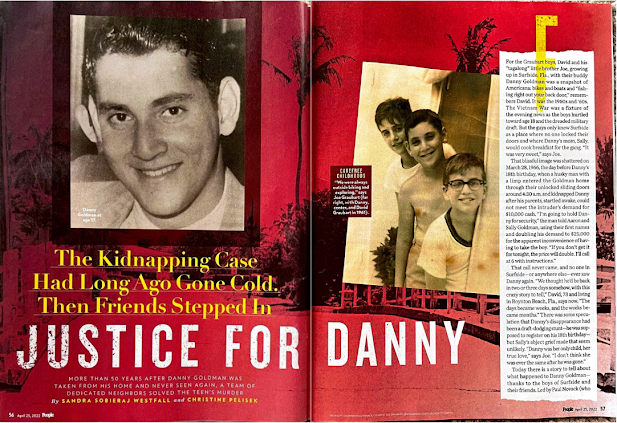 January 13, 2022
A cold case that has haunted Miami-Dade, Florida for the past 55 years has finally been solved with the help of a former mayor. Daniel Jess Goldman was just one day shy of his 18th birthday when an unidentified man abducted him at gunpoint from his parents’ Surfside home. The year was 1966. The perpetrator bound both of his parents and demanded a $25,000 ransom for their son. But the Goldmans didn't receive instructions for the exchange and their son Daniel was never seen again. Paul Novack, an attorney who served six terms as Surfside's mayor, took a personal interest in the case in 2012. He began pouring over details of the kidnapping along with a group of fellow 'sleuths' who try to crack unsolved crimes. Cold case detective John Grossman says “crucial information” uncovered by the former mayor led them to a man named George Defeis. He was a career criminal with ties to the Trafficante crime family. The identification shed new light on the nature
Post a Comment
Read more

August 23, 2018
Congressional Record PROCEEDINGS AND DEBATES OF THE 115 TH CONGRESS, SECOND SESSION UNITED STATES OF AMERICA HOUSE OF REPRESENTATIVES RECOGNIZING MR. PAUL NOVACK The Honorable Ileana Ros-Lehtinen of Florida August 7, 2018 I am humbled to honor an extraordinary citizen of our South Florida community, PAUL NOVACK Hailing from Miami-Dade County, Paul has served as a tireless advocate and public servant for those who call our slice of paradise their home. A proud graduate of my alma mater, the University of Miami (Go Canes!), Paul served as student body President among many other leadership roles. Following his undergraduate degree, Paul enrolled in Nova Southeastern University, where he earned his Juris Doctorate. Upon completion of his law degree, Paul began his journey to what became an extraordinary legal career, representing thousands of clients and litigating numerous cases across multiple legal subjects. In 2016, Paul was hon
Post a Comment
Read more

February 20, 2017
Surfside’s police department was never exactly “Miami Vice” though it shares Collins Avenue and the Atlantic Ocean. Certainly the seaside town is not today’s “Hawaii Five-0,” either. Indestructible commanders like Steve McGarrett are not chasing perps by leaping across rooftops in choreographed pursuit or defusing bombs that could wipe out a whole state. Sure enough, former Surfside Police Chief Terrill Williamson once told the Miami Herald that police training in the community north of Miami Beach, population about 6,000, stressed citizen assistance. “The little things help keep you professional. I think they’re just as important as making arrests,” Williamson told the Herald in 1982 — 20 years into his career with the department. One of his first initiatives as chief was to institute a walk-and-ride program where patrol officers would drive to an area and then patrol on foot. “We want to have close contact and high visibility with the residents,” Williamson said in
Post a Comment
Read more

MIAMI HERALD: Mickey Novack, the woman who gave birth in a bomb shelter and ran a South Florida city 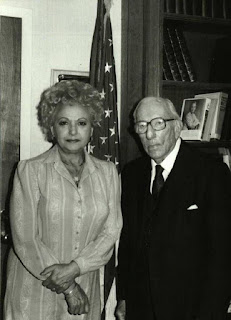 Obituary: Mickey Novack, the woman who gave birth in a bomb shelter and ran a South Florida city By Howard Cohen Former Surfside Vice Mayor Mickey Novack with one of her admirers, late U.S. Rep. Claude Pepper. Courtesy Paul Novack Read more here: http://www.miamiherald.com/news/local/obituaries/article64671882.html#storylink=cpy Read more here: http://www.miamiherald.com/news/local/obituaries/article64671882.html#storylink=cpy Novack’s challenges inside that shelter in Bethnal Green, a Jewish section of London, were just beginning. “She gave birth to my sister in the bomb shelter during the air raid,” her son, attorney Paul Novack said on Monday, a day after his mother, a former vice mayor for Surfside, died at 97. “For 40 days and nights, the Nazis bombed them every single day,”
Post a Comment
Read more